Having a Father who was Scottish, it was inevitable that he played golf. My Father – Julian James Barlow Walker, to give him his full name, was passionate about sport and in particular golf and football. I imagine that if he’d been born today or even within the last fifty years, he would have tried to pursue one of his passions professionally, but when he was growing up earning your living from playing sport was something that only working men did and it certainly wasn’t a viable way to earn a living. Instead my Father moved from his childhood town of Banff in North Eastern Scotland, attended Liverpool university where he successfully qualified to be a dentist and then got his first job in Kent where I was to spend my childhood.

My earliest recollections of golf were caddying for my Father at Faversham Golf Club on Sunday mornings, which along with shoe cleaning duties was to provide my pocket money for my early teenage years and the means by which I paid for sports equipment, whether it was a tennis racket or money for riding lessons. Unbeknown to me at the time, my Father had a good golf swing, which I imitated when I occasionally picked up a golf club. At his lowest my Father was a two handicapper – he had a powerful, rhythmical swing, was an inconsistent putter and always fiercely competitive.

As a consequence of my Father’s love of golf, my Mother took up the game and although her lack of length meant that she would never be a low handicapper – she was 18 handicap at her best, she was the ideal foil for my Father in mixed competitions, since she seldom missed a fairway, had a steady short game and was an excellent putter. My parents often featured in the prizes of mixed opens and club competitions.

All of my childhood memories of holidays involved golf. The first ever formal golf lesson that I had was from the professional at Trevose – Cyril Pennington, during a family holiday to Cornwall. Mr Pennington told my Father that I had potential! I duly started to play golf and in a short time, instead of having to put up with my parents playing golf every day on holiday, they were soon taking me away, at home and abroad to play in competitions, firstly as a junior and after that in adult competitions. At various times in my teens I played in tournaments in Spain, France, Holland, Portugal and then my international amateur career took me to such faraway places as Fiji, Singapore, Ceylon, as Sri Lanka was then known, New Zealand, Argentina, Kenya, Belgium and of course America. 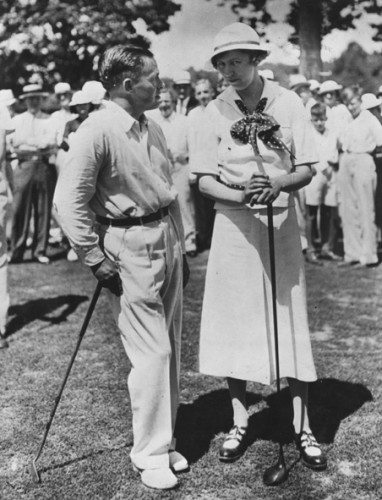 Early on in my amateur career I was fortunate to have met and been influenced by some extraordinary golfers. I was extremely lucky to meet and play a few holes at Faversham with Wanda Morgan, who golf historians will remember as one of the best British female golfers of the 1930’s. Wanda won just about everything that it was possible to win during her career as well as having played in an exhibition match with the American Bobby Jones during one of his visits to the UK. There is an iconic photo of Wanda, Bobby Jones, Joyce Wethered and one other playing in front of enormous crowds in 1931.  I can vividly remember Wanda’s golf swing as being the most rhythmical that I had ever seen then and probably since. I also remember having a wager of sixpence on the five holes that we played and winning the bet!

Another iconic figure in women’s golf that I played with and who gave me enormous encouragement was Scotland’s Jessie Valentine. We met when my Father and I were playing in the family foursomes at Burhill and we were drawn together to play in the consolation event having both been knocked out in the first round of the main event. As a shy fifteen year old I can remember being awestruck at not only meeting but actually playing golf with Jessie Valentine whose Dunlop clubs I had started to play with and still used at the time. I couldn’t believe it when Jessie invited my Father and me to be her guests at the forthcoming Dunlop Masters tournament at Sunningdale!

Looking back, I wish that I’d had the foresight and been bold enough to ask Wanda and Jessie some of the questions that I now have in my mind. Some year’s later I was in the company of Joyce Wethered, who many people, including Bobby Jones, considered to have the best swing, male or female of all time. How I’d love to have the opportunity to turn back time and ask them all hundreds of questions, but at least I have my memories of being in their company.

Perhaps one of the biggest influences of my career was Elsie Corlett, a former English amateur champion from Lancashire who became an English selector. I can remember Elsie telling me during an English Girl’s championship played at Hawkestone Park in the late 1060’s that I would never really be a top player unless I changed my strong right hand grip to a more neutral position. I can remember Elsie having endless patience as I hit shot after shot with my “new” grip and watching the resulting sliced drives. We spent hours on the practice ground during which I was a very reluctant student, since it took some time before the results started to improve and it was only with better results that I was convinced that “this old lady” knew what she was talking about!

I was also lucky enough to become a friend of the then chief golf writer for the Daily Telegraph – Leonard Crawley. Leonard was a former Walker Cup 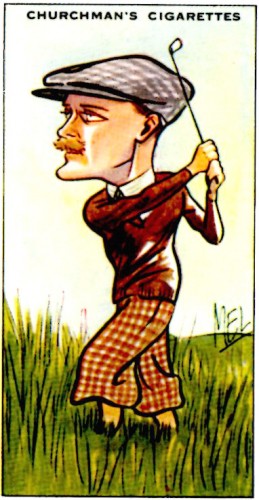 player as well as a top class cricketer. I met Leonard through an annual match played at Royal Worlington, between a top women’s team and a team representing Cambridge University, past and present. On one occasion when the possibility that UK golfers might have to start using the American, larger 1.68 diameter golf ball rather than the 1.62 diameter ball that was being used in the UK, Leonard had recently returned from a trip to the U.S.A. and had brought some of the 1.68 diameter balls made by Titleist back with him. Leonard was convinced that it was only a matter of time until golfers throughout the world had to play with the larger ball, and very generously presented me with a dozen Titleist ball of the larger size with the instruction to get used to playing with them and thus have an advantage over my compatriots. I can still remember how privileged I felt to be given such a box of treasure!

Looking back, I was very fortunate with the people that I met early on in my career and of course because my parents were in a position to help me pursue my dream of reaching my golfing potential. After achieving much success as an amateur both in the UK and abroad, the next logical step for me was to become a professional and try my luck in America. I couldn’t believe it when I was contacted by Mark McCormack, the manager of “The Big Three” Arnold Palmer, Gary Player and Jack Nicklaus, wanting to meet and discuss what his company International Management Group (IMG) could do for me! That was in the summer of 1973 and by the end of that year I duly signed a contract to be managed by IMG and embarked on my professional career in golf. Now that’s another story!