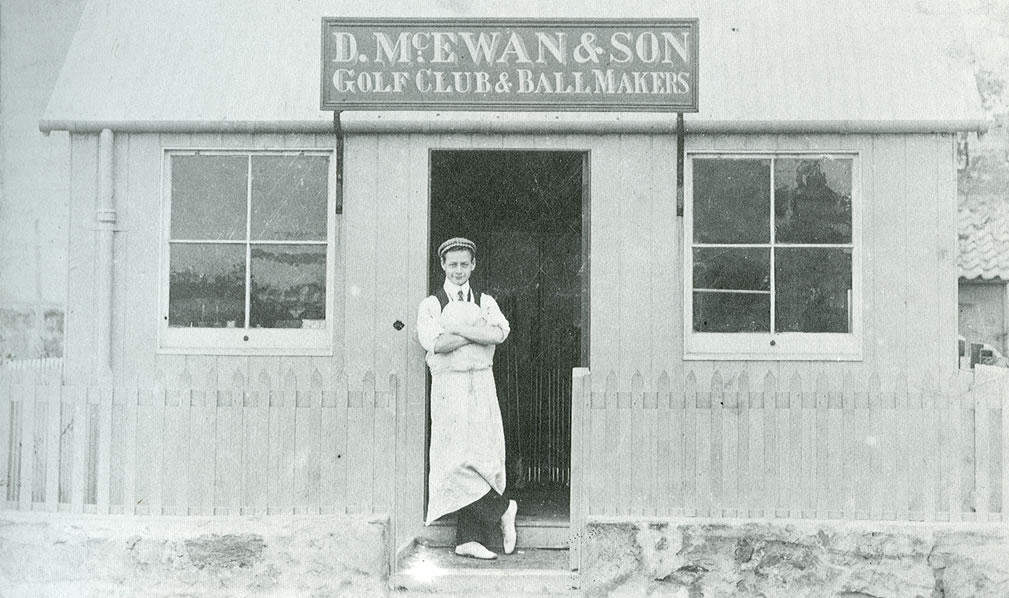 An assistant at the door of the McEwan’s Bruntsfield shop

The McEwan family of clubmakers was the oldest established and most famous family business in the golf trade. In 1770 (the same year as Beethoven and Wordsworth were born) James McEwan, born in Stirling, set up in Edinburgh where he became clubmaker to members of the Bruntsfield club. He started life as a joiner and cartwright although he must have had some training in the craft of clubmaking before coming to the capital. Examples of his work are few and far between, but a rare club does exist in the Royal & Ancient holdings in their clubhouse in St Andrews. The head is stamped, uniquely, J McEwan with a thistle mark above.

James was followed in the family business by Peter McEwan (1781-1836). Peter was 21 when his father died but he was clearly a young man of talent and drive for, by 1820, he had three men working for him. Clubs made by him certainly exist but the attribution of McEwan clubs to individual McEwans in impossible as, after James McEwan’s death, the family simply put the name McEwan on their clubs – with no initial. The McEwan family lived in a small group of houses, known collectively as Wright’s Houses, at Bruntsfield. In 1780 they acquired neighbours called Gourlay. Douglas Gourlay came from Musselburgh and was the acknowledged master feather ballmaker of his time. In 1802 Jean Gourlay married Peter McEwan. As Douglas Gourlay had three sons, all in the feather ballmaking business, Bruntsfield GC had a complete club and ball making service provided by the two families, who not only lived near one another but were linked by marriage. The clubs made by Peter McEwan would have had blackthorn heads and ash shafts. He was a well known and respected maker of clubs. 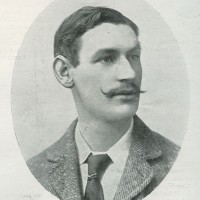 Peter McEwan had two sons, Douglas (1809-1886) and James (1805-1836). Douglas followed in his father’s footsteps and became a very famous clubmaker. James was apprenticed to Gourlay and became a ballmaker; we do not know a great deal about James because he died at the age of 31, by a curious and sad coincidence on the same day as his father. Douglas continued in business until his death in 1886, when he was succeeded by his son, Peter (1834-1895).

The third Peter (1873-1942) continued in the family tradition and was the pro at Southport and Huddersfield, and his four brothers also served as professionals. The fourth Peter McEwan (1895-1972) was the pro at Preston, Kilmarnock and Nairn before retiring to St Andrews.

The McEwan family rightly earned a pre-eminent reputation as clubmakers and at one time supplied clubs to Aberdeen, Montrose, Perth, North Manchester and Blackheath, as well as Bruntsfield and Musselburgh; they also supplied clubs and carried out repairs for the members of the Royal and Ancient. David Robertson, of the famous ballmaking family and father of Allan, was their agent at St Andrews for a time. They opened clubmaking premises at Musselburgh in 1847, when the playing of golf became difficult at Bruntsfield and, at one time, had similar premises at Gullane. They had connections with Loretto School, residing as it does alongside the Musselburgh School.

The McEwans’ clubs were considered every bit as good as the ‘master clubmaker’ Hugh Philp and several golfers of the late 19th century, including the famed writer Bernard Darwin, thought that the McEwans’ putters were superior to Philp’s. Perhaps the most important feature of their clubs was that, while being graceful and finely finished, they were also sturdy and strong: Philp’s clubs were considered by many to be slightly too fine in the neck, and therefore liable to split and crack. For most of their working lives the McEwan family made the long nosed clubs but, by 1885, they had changed to making bulger clubs which were much in demand. With the arrival of the socket head clubs and mechanisation, the McEwans as a family bowed out of clubmaking and, although Peter McEwan had five sons who were all clubmakers, the concern ceased operations as a family business in 1897. Succeeding generations of McEwans earned a living as golf professionals around the country and so continued the family involvement in matters golf.

The McEwan stamp which appears on only three early clubs

Clubs with McEwan stamped on the head can be seen in many collections. The R&A has some excellent examples (including the only known example of a club by James McEwan, complete with thistle mark), and there are some beautiful clubs at Muirfield, Woking, Royal Wimbledon and Royal St George Golf Clubs.

Rhod McEwan shares a name with this golfing dynasty and with their strong links to Musselburgh. Rhod, whose father was Peter James McEwan, attended Loretto School which has a fine golfing pedigree, nestled beside the famous old links of Musselburgh. Every day he walked past the impressive golfing medals of Johnny Laidlay, that great Amateur champion of 1889 and 1891, who was an ex pupil at Loretto. As has been mentioned, the McEwans helped the boys with their golf at both Loretto and Musselburgh, as did Bob Ferguson, a three time Open champion (1880, 1881, 1882). So the name McEwan, together with Musselburgh and the sport of golf, are as closely intertwined as the whipping on one of their finest hickory long nosed, feather ball era clubs. Through their dedication and superb craftsmanship the McEwans helped to shape the evolution of the golf club, and therefore golf itself, leaving an indelible family mark on the game.